“A truly rich man is one whose children run into his arms when his hands are empty.”
– Unknown

When Meharaj was born in December last year and I had held him in my arms for the first time, I was overwhelmed. I had written about that experience and the true meaning of Joy, here.

And let me tell you that, the experience of being a parent is indescribable. Yes, it is a joyful experience. But it is actually much more than that.

Everyday, when I reach home, after a long and tiring day at office, and he sees me, his eyes light up. No money can buy that glow in his eyes. He may still not fully understand my relationship with him, but he knows that we both love each other immensely and unconditionally. As I enter my home and put my bag down, he crawls excitedly or more recently toddles towards me with an infectious energy. He expects me to pick him up and shower kisses on his face. And this happens every day. As he grows up, and he understands our relationship better, I hope we are able to continue with this father-son ritual.

The first word he ever uttered was 'Pa Pa'. That was another moment, I would always cherish. He still doesn't say much. Just makes lot of sounds, but strangely, we both make small conversations using these sounds. He stops doing things, when I say 'No', but only momentarily. He smiles at me and gets back to whatever he was doing. That is his cheeky rebellion. Also every time I blow a raspberry, he tries to imitate that mouth-fart sound by blowing his own spit bubbles. As he grows up, and he understands the words and their meaning better, I hope we make enriching conversations, which stay back with him, when I am gone. 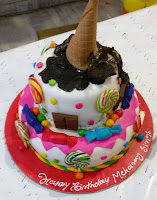 We buy him toys, lots of them and of different types. But he doesn't play with them. He finds spoons, remotes, kitchen utensils, my bookshelf, and other random things more interesting. His curiosity and sense of wonder are traits, which I think, I should emulate.Whenever my wife is not around and I have to engage him, I find new games to play with him. And he picks them fast. Like in first few months, he used to enjoy me cupping his ears with my hands. He used to pull my hands to his ears, every time he felt bored. Then we discovered 'kicking legs'. Every time I would thump a surface with my hands, feet or legs, he will start kicking his legs faster and squeal with delight. Then he took fancy to 'peek-a-boo' with bed-sheets. Sometimes when I was busy with something else, he would pull a sheet on his head and ask me to play. The games keep changing, but his enthusiasm to try new things is a constant. As he grows up, and he understands sports and competition better, I hope we still keep playing for fun.

Over the last one year, he has made our lives happier and more beautiful. On his first birthday, 21st December 2017, we had an ice-cream and candies themed party, as he loves sweets a lot. And he is an absolute sweetheart. I love him.

Posted by Charan Deep Singh at 5:43 AM 9 comments: Links to this post