Let me be upfront here. I don't know why I have titled the post like this. I don't have any idea whether there would be a Part II or Part III. I am not even sure, what I am going to write about in this post. I just like the phrase, "Crazy People". May be I am crazy to think that I can write multiple posts with the same title. May be I am not only crazy, but also lazy. Too lazy to think of new post titles!

But let me assure you that when these two words - crazy & people - come together in my mind, the images that take shape in front of my eyes are really amusing. You guys are unlucky, because my words would never be effective enough to explain those images.

Let me still try to explain.

I just imagined a crazy person (Let us call him Mr. C) who sent me a calendar request without checking my calendar. Basics! You muttered under your breath? But Mr. Crazy is too big for his boots to do such mundane tasks. I am sure you have a Mr. C in your life too. Can you imagine his face? And can you imagine those word clouds, filled with the choicest of cuss words, that accompany the face you imagined?

I hope now you understand what I am getting at! 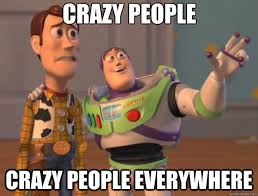 That reminds me of yet another crazy person, I know. Five of us were at a restaurant last week, with a crazy dinner & drinks package. In Rs. 1100, one could get unlimited beer, unlimited snacks served on the table and buffet dinner to top it. I kept wondering, which crazy person would design such a loss making package for his or her restaurant. But then I saw this crazy person in our group pouring draft beer in a soda bottle, to carry home. Now who does that! Especially when someone serves you unlimited beer! Is the world really coming to an end?

Lot of crazy people don't understand the difference between correlation and causal relationship. They don't even understand the concept of multiple variables leading to an outcome. Like all BJP (ruling political party in India) acolytes think Congress (losing political party of India) lost recent elections because Rahul Gandhi (who was the president of Congress till few weeks ago) is a dumb or a crazy person. They don't realize that there are several other variables at play. Maybe Congress party has no strong cadre at grass-root levels. Similarly, all the losers think that BJP won, because almost everybody who voted for BJP has xenophobic tendencies. They might have totally ignored, populist measures taken by BJP for rural and economically less privileged Indians. I am not indicating here that one factor is more important than the other. There might have been several factors at play. But is it crazy on my part to expect nuance in political debates?

A movie critic doesn't want me to watch Salman Khan films because he has done few bad things in real life, though his on-screen characters are generally too nice to be true. The same critic doesn't want me to watch the latest Shahid Kapoor film, because he plays a really bad and toxic guy on screen. And the ADULTS who went to watch the film, might get influenced by this character. This is despite the fact that Kapoor is considered one of the nicest human beings in the film industry. Typical, family man! This critic also found a violent female character in Gully Boy, spunky. Not toxic! Spunky! Clearly consistency is not the trait of crazy people!

A crazy thought just crossed my mind! I have more to say about the craziness in this world. There will be a Part II.

I generally don't like such self-assured books that are meant to provide you with one silver bullet for all problems in your work domain. So it is no surprise that I didn't like All Marketers Are Liars Tell Stories by Seth Godin too much. This one had come highly recommended, so picked it up for reading despite my apprehensions about this genre of books. Let me assure you that I am actually aligned with the core concept, the author talks about in this book and fully agree with his theory - That a brand story has to be good and authentic and also in line with the world view of the target group. Then only your brand story will spread and create a want for your products.

At the same time, I felt that this subject didn't require a book, but a blog-post which can be read in 10 minutes would have been enough. I found it highly repetitive. The case studies / brand stories - both successes and failures - that author has used in this book as an evidence to prove / disprove his hypothesis, at times felt force-fitted. Some of these cases have been used by other Management Gurus in their books, to explain their respective frameworks. As they say, hindsight is a perfect science.

As a practicing marketer though, it made me think about certain issues that plague the industries where products/services have become commodities, and differentiation is the key to success. That helped me crystallize my thoughts on a particular plan I was working on. All was not lost!

1984 by George Orwell is as sharp and incisive as a political commentary today, as it would have been, when it was first published in 1949. So much has been written about this book, that I am not even sure what new I can say about it. As the book is also about freedom to express one's views, I think I will go ahead and write my views on this book anyway.

It is a dystopian novel, written in 1948, set in the future year of 1984. It deals with the issues of political overreach and propaganda. It is a political satire on totalitarian governments and the havoc they wreck in an individual's life through their surveillance. The chapters in the novel that talk about the power structures and purpose of power itself, are so well written that they hit the readers hard.

As a reader, I constantly hoped (like the lead protagonist Smith) for the revolutionaries and brotherhood to exist. I wanted an underground revolution to happen by the end of the book. But by the end, the thought of revolution itself is killed. It was gut wrenching. For me the book turned out to be a manual on "How to kill Human Spirit?". I kept thinking about the book days after I had finished reading it. It is fascinating, how so many things described in the book, find parallel in today's world - politics and more so in the corporate world. Not only present day governments, but how big corporate companies are constantly monitoring us. How politicians, coin words and phrases, which make us think in one direction, rather than let us evaluate! There is an appendix at the end of the novel that explains a language (NewSpeak) used by the government described in this book. It is fascinating to understand, how language or lack of it can be used as a tool of oppression.
---

You now know which book to pick among the two reviewed in this post!
Posted by Charan Deep Singh at 2:55 AM 1 comment: Links to this post