After a long gap I got sometime today, to write. Also it is the first time in this year, when I am lagging on my reading goals. I should have completed reading my 22nd book this year by now, but I just completed the 21st.  Truly speaking, I am not unhappy about it for two reasons. One, I had a well deserved vacation with my family and I didn't feel like reading during that period. Second, the last book I finished made me think about my life and thus I wanted to stay with the thoughts expressed in that book for a little longer before picking something else up. So I believe December would be all about catching up.

The three books I am going to write about today are totally different from each other. They belong to different genres, have varied writing styles and cater to sensibilities across the spectrum. 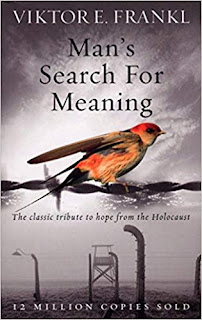 Man's Search for Meaning comes highly recommended. And I had huge expectations from it. It is part biopic and part treatise. In the first part Viktor talks about his horrific experiences at a concentration camp and how he survived by focusing on the meaning of his life. In the second part he talks about his takeaways from the time he spent in those camps and gives a theoretical framework of his seminal work in logotherapy. Truth is that the second part of this book was way too technical for me to appreciate it. Also as I have not read much about psychology or psychotherapy in general, I would not like to comment on this part of the book. The first part is fast paced and the author paints a vivid account of his experiences. There are few points in this part which forced me to think about the importance of meaning in life. I have seen the film Life is Beautiful on a similar subject. In comparison the book comes across as tad underwhelming when describing the
horrors of being held captive.

So while the book is touted as highly profound, I would say that it is rather a well chronicled account of life at concentration camps and, as a reader, there is lot to learn from this part of world history. The book ends with following lines which exhort the readers to do their best.

"So, let us be alert - alert in a twofold sense:

Chetan Bhagat's latest book is a huge disappointment and I am not one of those readers who dismisses him as an author. I have always believed that he is a good story-teller despite his limitations. He mostly writes about youth and slice of life experiences which are narrated with a light touch and a typical sense of humor. The conflicts in his books are very middle-class and thus as a reader you identify with them. But in his latest book The Girl in Room 105, he tries to switch genres. He attempts a thriller and fails miserably at that. In portions, where he talks about college experiences, conflicts between the girl and the boy and career choices, he does well. But as a thriller he fails to create any tension. The reveal at the climax is not satisfying. And while the book is fast paced, as a thriller it is repetitive and slow. 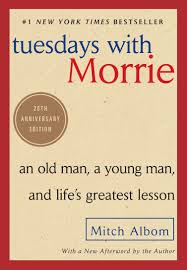 Tuesdays with Morrie was an interesting read for me because:

1. It doesn't belong to any conventional genre of books. It is a true account of two lives but not really a biopic. It is that rare self-help book that doesn't get prescriptive. It is a motivational book but without the standard tropes
2. It deals with intense subjects of illness and death and still remains light and breezy
3. The book is not only about what it says but also about what you think after you read something in it.

While many readers claim that it has helped them re-look at their lives and set their priorities right, I believe that at least I am more aware about the same, even if I am yet to make a change. So the book succeeds in stirring something inside you. It helps you understand life and death better. It makes you more accepting of the inevitable. Out of the three books I read in last few weeks, this one was the best.

Do share your Search experiences with me in the comments space.

Which book you would recommend for me next?
Posted by Charan Deep Singh at 4:56 AM 1 comment: Links to this post