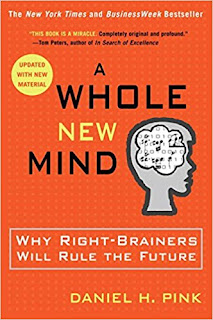 After a long time, I picked up a book in the genre loosely termed as management / self-help books. My experience with this genre in past has been less than satisfying, mostly. This book, which is pompously titled - A Whole New Mind: Why Right-Brainers will rule the future - is also less than a satisfying read.

The author, Daniel H. Pink, tries to hammer in the fact that jobs moving to Asia, Abundance and Automation have created a scenario in America (or developed countries) where Right Brained jobs will become more lucrative and R - Directed Thinking will become a desired skill. And he reproduces this fact in thousands of ways in his book. If I am that bad a reader, that I need same thing to be repeated for me so many times, I really don't deserve to understand this simple postulation.

After introducing the reasons for Right Brainers ruling the future, the author explains the six senses / tools that are required to develop or nurture R - Directed Thinking. (R - Directed Thinking doesn't mean that left side of the brain is not required. It just means that senses which are dominantly right brained will have to play a larger role) These six senses are - Design, Story, Symphony, Empathy, Play, and Meaning. These six senses put together highlight the importance of creativity and innovation as key business differentiators.

No doubt that the author brings to fore an important change happening as of today, but as an Indian reader, I found the book lacking in several aspects. The book divides the world between developed countries and Asia. So L - Directed thinking jobs moving to Asia (including India), is one of the key reasons, why Americans should incorporate R - Directed thinking in their armor. As a reader, while I can apply the lessons in India specific scenarios as well, the book essentially alienates Asian readers. There is no effort to discuss what these changes mean for Asians. It feels like the issue at hand is not that hot for knowledge workers here in India.

Each chapter on the six senses, is followed by a portfolio of resources, which one can use or visit, to sharpen these senses. This feature is excellent, but I so wished, that the author had kept in mind an Asian context here as well. Indians have a particular way of learning things and sharpening their skills. By focusing on US context here the author misses the fact that some senses / values like Meaning and Empathy are deeply ingrained in our culture. Story-telling is also a key skill which Indian leaders have used since ages. Indian leaders, in my experience, generally have R-directed thinking. I hope in the next edition, author takes this diversity of work cultures and leadership styles into account.

While the set up for the need of R - Directed thinking is done beautifully, I felt there were not enough examples or compelling cases shared in the book, which make it evident how people are really nurturing these senses at their workplaces. May be the book was only meant to scratch the surface so that Pink gets lot of consulting assignments to really reveal the nuts and bolts of the subject at hand.

Out of the six senses, I felt that in the chapters on Meaning and Play, I found things which were great thought starters. These two chapters made this book worthy of an average rating.
Posted by Charan Deep Singh at 5:50 AM

Thanks for your views Dr Soni

Hi, CharanDeep - I enjoyed reading your succinct and honest review of A Whole New Mind. I especially liked how you pointed out flaws, but also highlighted sections that you believed worked well. Nicely done!

Thanks a lot for your kind words @retirementreflections :-)

Stopping by from the #AtoZChallenge Road Trip! Enjoyed reading your review from an Indian perspective!

Thanks for your kind words Flores