"Cleaning your house while your kids are still growing up is like shoveling the walk before it stops snowing." - A quote by Phyllis Diller, an American actress and a stand up comedian who had 6 children.

21st December 2017 : We celebrated his first birthday in Ludhiana. That is where his grandparents and our extended families live. I wrote about it here.

21st December 2018 : We celebrated his second birthday in New Delhi. I had to travel regarding my work to New Delhi and didn't want to be away from him on this day, so I took him and my wife along with me. My mother and brother traveled all the way from Ludhiana to meet him in Delhi and we had a mini celebration. 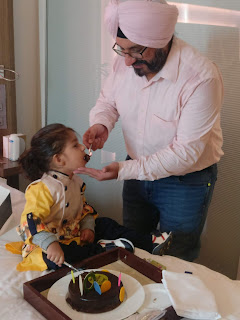 He has a sweet tooth, clearly.

He stays and goes to a playschool, in Chennai. And he had his first international vacation in Mauritius in November last year. Interestingly, he is a very well behaved child in flights, so far. Touch-wood! Because on ground he is unrestrained, putting it mildly.

So he has in all probability, clocked more miles in 2 years than I did in first decade of my life. He has stayed in multiple cities and is exposed to many languages - English, Hindi, Punjabi, Tamil and Marathi. His parents don't know the last two. He is truly growing up in a multi-cultural environment. This is an exciting and a scary thought at the same time.

Since I last wrote about him in this post, he has added few more words to his vocabulary. Though other children of his age speak many more words and more complex words too, he compensates for this lack of vocabulary with his exaggerated body language. Each word he has learned is always accompanied with a gesture. He keeps saying "Bye" to people in a musical way and with a wave of his hand. He looks really cute doing it. Then he has learned two words in Punjabi, "Bas" (stop or that's it) accompanied with a show of hand like a traffic cop and "Kitthe" (where) along with an upward nod of his face, as if questioning me. For him every bird is a crow. He sees a bird and he shouts happily, "K(r)owww," with the 'r' remaining silent. At times, he points towards himself and will keep repeating, "Baby" in his babbieee sound. While he learned the word "Papa" very early (in fact it was the first word he ever uttered), he still just keeps saying it without necessarily calling me out. Though when his mom asks to give his "Papa" something, he knows where to go. He doesn't say Mama or Mummy and surprisingly calls his mother "Paapi" or "Papi". But his favorite phrase is actually gibberish. He even keeps blabbering it in his sleep. "Kunte-Kunte". Guess what we were trying to teach him! "Chhotte-Chhotte." (Little-Little)

He has also learned to throw a tantrum and knows how to get things done. He is a really active child and can shake his legs in a clumsy manner when you ask him to dance. He keeps climbing on things and people without fear of falling. He likes to eat only while playing with my shoes. He likes to walk in them. He raids the refrigerator for chocolates or dates every time he gets a chance. When I reach home, he asks me to pick him up and then he would keep my pen, my watch and my wallet in the cupboard. The day I forget this ritual, he starts whining. He has now a complete set of teeth, with which he can give you the brightest smile or he can bite your fingers off. When he makes a mistake and he knows it, he will blink both his eyes in a way that you will be forced to kiss him or hug him.

I like my home to be clean and like my things to be at the right places. But Meharaj is not like that. He likes mess. He loves chaos. He throws toys, food, water, remotes, keys, creams, pillows, or anything which he can hold in his hands on the floor, on the bed, under the bed and inside the shower. I was too naive to think that I can keep my house in order. I have given up! I think I have finally learned to 'Let go'. I love him.

Posted by Charan Deep Singh at 5:05 AM 53 comments: Links to this post