It is that time of the year again. April  A to Z blogging challenge is knocking on the door. This will be my third consecutive year of participation. And I am really excited to complete it this time too. Looking forward to your comments, feedback and most importantly encouragement to make this happen. As they say third year is always the toughest one. So fingers crossed!

For the uninitiated, this challenge is about writing a blog-post daily through the month of April, except on Sundays. And to raise the bar higher, one has to post with topics arranged thematically from A to Z. 26 letters of the alphabet! 26 posts!

The theme I have chosen this year is related to a subject very close to my heart - Films. I love watching films, discussing them and sometimes writing about them. So here is my theme for this year's challenge : Hindi Film Industry / Bollywood Cliches

In fact the name Bollywood used to describe Bombay Cinema or Hindi Language Film Industry itself is a cliche. While Hollywood is a place, Bollywood isn't. Bollywood is a portmanteau of "Bombay" and "Hollywood". Let the movies begin! 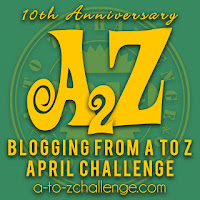 Posted by Charan Deep Singh at 9:15 AM 6 comments:

A Brief History of Tomorrow - Book Review of Homo Deus

If you want a book to play on your mind, long after you have completed reading it, may be Homo Deus : A Brief History of Tomorrow by Yuval Noah Harari will fit the brief perfectly. I had read Sapiens - A Brief History of Humankind by the same author last year and had reviewed it here.

Homo Deus is a follow-up book to Sapiens. But don't worry if you haven't read the earlier one, though I strongly recommend it. The author makes concrete efforts to provide all the key concepts of Sapiens in a succinct manner in the first few chapters of this book. And then also links those concepts with his hypothesis for this book. The book in itself is thrilling, exciting, scary and a fast read. While reading Sapiens, I was overwhelmed with the way the author made history, simple and fun. He interpreted history in a modern milieu that connected with me. But this time, while reading Homo Deus, I discovered the story-teller in him. I noticed his wit and dark humor. I was impressed by his knowledge on subjects so varied. I was overwhelmed by his fertile imagination, (which might be just a biological algorithm) and yet a rooted narrative and his ability to make far fetched things sound reasonable. As a reader, whether you agree with his theories or not; the examples, parables and anecdotes he puts forth in support of his theories can't be disagreed with. 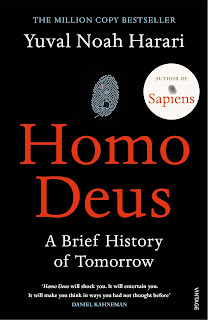 This book is not for the weak hearts. Sapiens made me feel good because it told us that in our human history we are placed much better than our ancestors. Homo Deus is scary because author's imagined future (high probability of being a reality) is a death knell for Homo Sapiens, especially the ones who don't have tons of money (62 people in the world have half the wealth of the world) or who don't have a talent which can't be converted into algorithms. Apparently, the art forms like music and paintings which we so strongly believe, reflect pinnacle of human glory, would be produced perfectly in near future by machines and Artificial Intelligence.

In The Matrix, the science fiction film that released in 1999, the film-makers showed a dystopian  future where machines would lord over the humans. The only purpose of humans in that imagined future would be to provide energy to run those machines. Neo (the lead protagonist played by Keanu Reeves) is 'the One', who provides hope for the humanity.

Yuval Noah Harari just stops short of stating the horrors shown in the film. But he clearly states that as humans were able to create imagined realities and mass cooperation networks, they emerged as superior beings to other animals. This enabled them to lord over animals. He is critical of how we treat the animals for our needs. Drawing a parallel to this, he imagines when data and algorithms would emerge as far superior entities than human beings, why those entities wouldn't treat us humans the same way, we treat animals!

I love the way author explains how our religions and Gods have changed throughout our history. The book looks at growth and spread of different religions (his definition of what is a religion needs to be agreed upon though) - animistic to theist to modern '-isms'  (like capitalism, liberalism, communism, socialism. humanism etc.) leading to dataism. I also particularly like the chapters, where he explains how science so far has been able to solve the problems of war, plague and famine. But the future agenda would be to provide humans with immortality, happiness and divinity. This might lead to emergence of super human beings (Homo Deus) who will not have much use for the useless Homo Sapiens.

There is a funny part titled, A Brief History of Lawns, in one of the earlier chapters, wherein he clearly indicates that we have a choice to make today. Our choices can change the course of tomorrow.  Clearly there is no 'Neo' who would be our savior.
Posted by Charan Deep Singh at 12:00 AM 1 comment: