Last year I read 21 books against a plan of 24. So this year again, I will try to reach that elusive number of 24. I am happy to report that the year has started on a bright note and I have completed two books in January, both of them non-fiction. Interestingly, both of them are also directly relevant to my line of work. But most importantly, each book has a unique perspective on things which are happening today, in front of us. 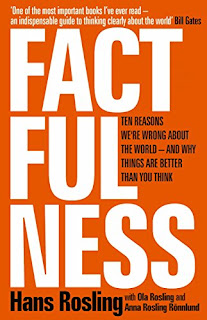 First book that I read is interestingly titled, 'Factfulness' by Hans Rosling. The tagline in the book title reads, "Ten Reasons we're Wrong About the World - And Why Things are Better Than You Think." That is a great hook. Though this book is not as deep or as profound as Sapiens written by Yuval Noah Harari (read my views on the book Sapiens here); in a way the souls of both books are connected. Both books tell us how our world is in a better place than we imagine. Sapiens relies on historical / archaeological evidence to make its case, while Factfulness makes us question our basic human instincts and biases, that blind us towards any data or facts or trends, contrary to our dominant thinking.

The author warns us about ten such human instincts and suggests methods to overcome those while making any assessment or forming any opinion. As certain instincts resemble each other, you might find book to be repetitive at times, especially in the first few chapters.

Also while the book deals with the subject of numbers / data / facts, it is still an easy read for everyone because the book's narrative is in the form of a story and is replete with relevant examples and visual aids. So while it is a good read for people who work with numbers, it is great for those who don't. 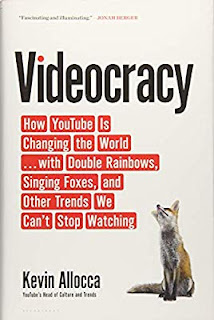 The second book is interesting and flawed at the same time. Videocracy by Kevin Allocca (YouTube's Head of Culture and Trends) is an interesting book because it talks about videos on YouTube and builds a context around them by explaining what makes YouTube a big deal for everyone in this universe. It is a flawed book because at times it sounds like a propaganda and a hard-sell. The book conveniently ignores the aspects related to moderation, privacy, consent, intellectual property and negative content - especially hate videos. It almost justifies cyber-bullying by citing the larger good. The book pompously suggests that everyone in this universe will rely on video content to know about humanity and culture and thus there is no other way to assimilate knowledge or learn. Now let me focus on my takeaways and the good bits.

The author tries to establish three things in this book:

1. The power to make a piece of content or a video (art?) successful or viral has shifted towards users /  viewers / communities. They are the ones who are shaping the changes on YouTube and the role of  content itself.

2. Celebrities - Fans equation is changing and is more of a relationship of equals now, due to diminishing distance between them through platforms like YouTube.

3. Most of the organically successful videos on YouTube are expression of self identity of the creator as well as of the viewers who made them successful. This concept is then linked to the rise of huge number of niche art forms and niche communities on YouTube.

There are several other takeaways in the book, but these three resonated with me the most.

Initial parts of the book were repetitive and exhausting as the subject matter isn't classified properly in chapters. Also most of the video references given to explain the points were US based and I either had to look them up or make some assumptions, which made it a slower reading experience. But the chapters on how marketing ads changed their nature due to YouTube or how YouTube changed lives,  due to its content related to learning (example 'How to' videos) and political discourse (example Arab Spring) appealed to me.

The last part of the book warns us of the pitfalls of what we share, view or believe. But it is not enough!

Both books made me think and that is a win. Next on cards is Yuval Noah Harari's follow-up book to Sapiens - Homo Deus: A Brief History of Tomorrow. Keep watching this space to know about it. Happy Reading!

Posted by Charan Deep Singh at 5:03 AM 6 comments: Links to this post